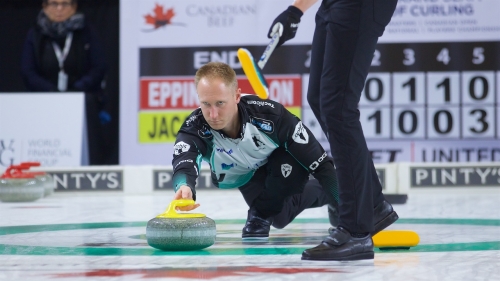 ESTEVAN, Saskatchewan -- Brad Jacobs has an impressive resume - Olympic gold medal, Tim Hortons Brier gold medal, men's world championship silver medal - and now he can add the Home Hardware Canada Cup. The Sault Ste. Marie, Ont., skip and his mate shepherded a deuce in the first end all the way through to the 10th end for a tightly contested 5-4 win over Kevin Koe of Calgary.

"This is a great event, top Canadian teams - men and women - so anytime you can sneak out a win like this it means a lot," Jacobs said. "You only get so many opportunities to win events like this, to put this on our resume feels great."

Jacobs made his open draw for two in the first end, but with the five-rock rule it seemed unlikely that the early-end score would ultimately be the difference. But the two highly talented foursomes traded singles and blanks through eight ends, and Jacobs conceded a steal of one in the ninth, keeping hammer for the final end. He made a final rock hit for the winning point.

"Our hitting and drawing have been really good this week... with five-rock (rule) there are still ways you can keep it relatively open and I think we did a very good job of that," Jacobs said. "We just controlled the scoreboard. I think we outplayed them tonight up and down the lineup; didn't give them too many opportunities to score the deuce back. I think we played a nice defensive style curling game."

Perhaps the best chance Koe had to counter the Jacobs deuce came in the fifth end when he had a draw for two, however the throw didn't count due to a time violation.

"I know the officials are here trying their best, but I think they just did a really poor job there," said Koe, a two-time world champion (2010, 2016) and three-time Tim Hortons Brier winner (2010, 2014, 2016). "We took a timeout and they told us we had 11 seconds and they didn't correct the clock. I know I missed my shot and we could have communicated better .. even if I throw it good we don't get it. That's not why we lost the game."

The new timing system - four minutes per end in the first five ends, 4:15 in the last five - is being field-tested here as a possible replacement for the 38-minutes per game time. The new system will not be used for this year's Scotties Tournament of Hearts in Sydney, N.S., Tim Hortons Brier in Brandon, Man., or the Pioneer Hi-Bred World Men's Curling Championship in Lethbridge, Alta., and ultimately would be a decision made by the World Curling Federation.

Team Jacobs takes home $14,000 for winning the Home Hardware Canada Cup, plus $10,000 for their five round-robin victories, a spot in the 2021 Road to the Roar Pre-Trials and they qualify for a World Curling Federation Curling World Cup event during the 2019-20 season.

Team Koe takes home $9,000 for finishing second in the Home Hardware Canada Cup and $8,000 for its four round-robin victories.