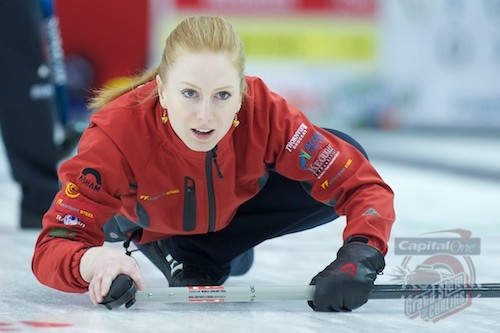 Born: May 20, 1979
in Winnipeg, Manitoba
Resides: Winnipeg, Manitoba
Throws: Right
Profession: Letter Carrier, Canada Post
High School: Westwood Collegiate
College/University: University of Winnipeg, University of Manitoba
In Own Words:
I guess you could call it a lifestyle... I was raised on the sport, and its deeply ingrained in my life. The championships I endeavor to win are very close to my heart, and the sentimental value attached to them is significant. I had a parent who was a highly competitive mens curler and being around that all my life fosters the urge to compete and excel in curling too. [cr][lf][cr][lf]I have made so many friends and have had the best times of my life with fellow curlers... It is a great community to be a part of.[cr][lf][cr][lf]One day I will stop curling altogether though, I can't see myself playing much or at all in the future unless it's at a high level. I'm at the point now where it's all or nothing for me, sink or swim. I've played too long to not truly give it everything I have now. I also have many other interests and things I eventually want to pursue, and to compete at a high level involves a lot of time and sacrifice meaning that I don't have much time for other interests. Once I am satisfied with my curling career and accomplishments I will be happy to take on another challenge.
Curling Highlights:
2005 Manitoba Scott Tournament of Hearts Runner-Up[cr][lf]2006 Manitoba Scott Tournament of Hearts Runner-Up[cr][lf]2007 Manitoba Scott Tournament of Hearts Semi-Finalist[cr][lf]2008 MB Scotties Semi-Finalist[cr][lf]2009 MB Scotties Semi-Finalist[cr][lf]2009 Team Manitoba - Alternate[cr][lf]2011 MB Scotties Runner-Up[cr][lf]2005, 2009 MB Scotties All-Star Skip[cr][lf]2011 MB Scotties All-Star Third[cr][lf]2010 Manitoba Lotteries Grand Slam Champion[cr][lf]2010 Sobeys Slam Finalist[cr][lf]2011 Manitoba Curling Tour Champion[cr][lf]2011 DeKalb Superspiel Champion
Junior Highlights:
1996 Manitoba Junior Women's Champion - Skip[cr][lf]1999 Manitoba Junior Women's Champion - Skip