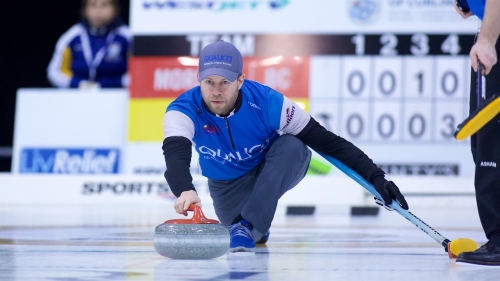 Born: Oct 15, 1974
in Kamloops, British Columbia
Resides: Vernon, British Columbia
Throws: Right
Profession: Health Care Computer Programmer/Analyst, Iatric Systems
High School: Norkam Sr. Secorndary
College/University: Thompson Cariboo Univ. (TRU)
In Own Words:
Curling has been a major part of my life since I was 8 years old. My first year of juniors began when I was 12 years old. [cr][lf][cr][lf]I currently help run the Vernon Junior Program for the past 6 years and am the Vernon rep for the Okanagan Junior Inter City League. My belief is that curling has given me so much over the years it's time that I give back to the game that has given me so much. [cr][lf][cr][lf]My oldest daughter Jaelyn, 12 years, is now actively curling and played her first year of juveniles last year. I was fortunate enough to coach the team. Some ask me what the pressure is like when curling and often say, there is no pressure in curling. Coaching your child and watching behind the glass is more pressure then I can handle..... My other 2 children are now getting the itch to start curling. I look forward to coaching them one day as well. [cr][lf][cr][lf]Since I was 9 years old, it's been a major goal to win the Brier. Hopefully one day this dream will come true. In recent years curling as become an Olympic sport and like most competitive curlers, the Olympics is extremely high on the bucket list.[cr][lf][cr][lf][cr][lf]
Curling Highlights:
2012 BC Men's Champion[cr][lf]2011 BC Men's Champion[cr][lf]2008 BC Menï¿½s Champion[cr][lf]4th at 2008 Tim Horton's Brier[cr][lf]Winner of 2008 Bear Mountain Classic Victoria[cr][lf]2005 Olympic Trials ï¿½ curled with Pat Ryan[cr][lf]
Junior Highlights:
1990 BC Junior Champ - finished 4th at Junior Nationals.[cr][lf]1995 BC Junior Champ - finished 4th at Junior Nationals.[cr][lf]3 Time Highschool Provincial Champ (1990,91,93)