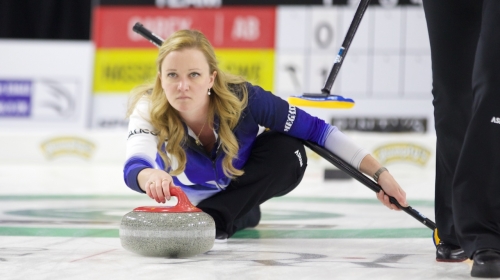 Born: Sep 12, 1984
in Winnipeg, Manitoba
Resides: Calgary, Alberta
Throws: Right
High School: River East Collegiate
College/University: University of Manitoba
In Own Words:
Curling is my passion. I have prioritized it over job opportunities, relationships, vacation time... you name it. It is a big part of who I am, and what I truly love to do.[cr][lf]I grew up at the rink watching my Dad play. The waitresses at the Granite CC in Winnipeg were my babysitters as a kid - they'd even let me sign my dinners to his tab! It has been part of my life as far back as I can remember. Watching my Dad win the Brier was one of the greatest experiences I have ever had... I knew then that I wanted to chase that same dream.
Curling Highlights:
2014 Canadian Scotties Bronze Medallist[cr][lf]2014 Manitoba Provincial Champion[cr][lf]2013 Olympic Trials 4th Place[cr][lf]2011 Canada Cup Finalist[cr][lf]2011 & 2012 Manitoba Provincial Scotties Finalist[cr][lf]2010 Manitoba Lotteries Grand Slam Champion[cr][lf]3-time Grand Slam Finalist
Junior Highlights:
2000 Optimist Provincial Juvenile Champion[cr][lf]2001 Optimist Canadian Juvenile Silver Medallist[cr][lf]2002 High School Provincial Champion